Square (NYSE: SQ) has been having a dream run in the stock market with the stock price surging more than 70% in the last 12 months. In 2019, the payments platform has already shot up 37%. In the past eight quarters, it has topped analyst estimates seven times on earnings and at one instance it has met expectations. With this solid backdrop, it would be interesting to see whether Square would sign off 2018 in style.

Jack Dorsey-led firm is planned to report its fourth quarter results on February 27, after the bell. Analysts are expecting Square’s earnings to jump 75% to $0.14 per share. Last quarter, the company has guided fourth-quarter adjusted EPS to be between $0.12 and $0.13 per share. For the fourth quarter, revenue is expected to come in at $454.1 million, up 60.7% over last year. The street is expecting the payment processor to report higher earnings backed by solid portfolio growth across the board.

In the third quarter, the fintech firm reported better-than-expected results, which includes one-time gain from the Eventbrite IPO gains. Despite the earnings beat, the stock plunged 4% post the results due to bleak earnings outlook which failed to beat street estimates. 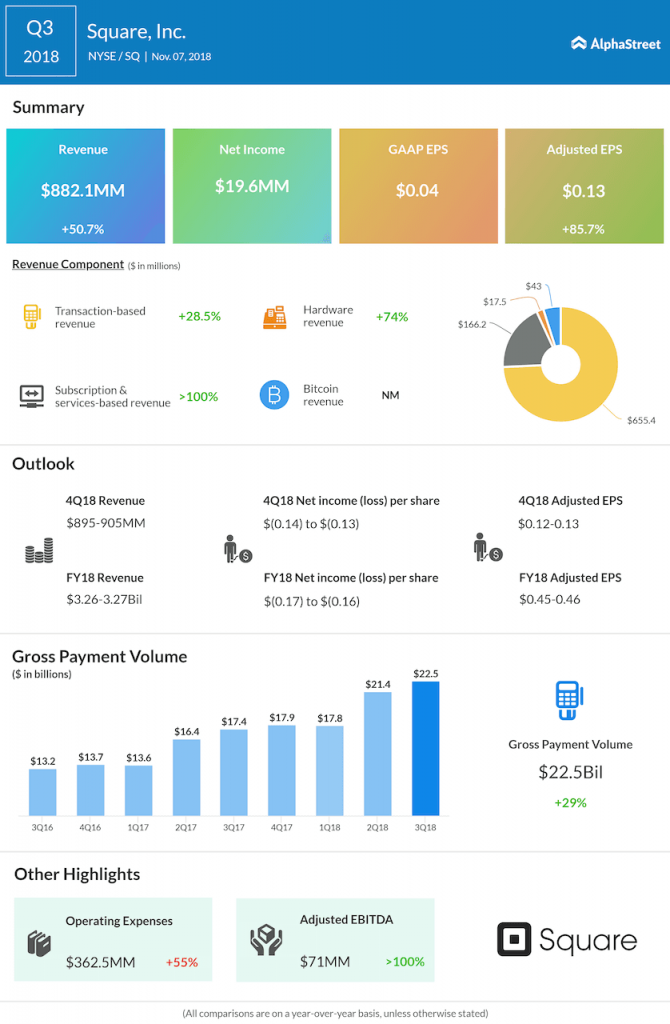 One of the key items to watch is Square’s outlook for the 2019 fiscal year. It would be an uphill task to continue the revenue run rate considering the tough comps recorded in 2018. Investors would be watching this metric closely to tweak their models accordingly.

Gross Payment Volume (GPV) is the most vital metric to gauge the performance of the payment processor. Last quarter, the company reported a 29% jump in GPV aided by strong growth from its large sellers. Analysts are expecting the trend to continue in the fourth quarter.

Transaction revenues is a major driver of top-line results. In addition, revenue from services, hardware and bitcoin trading would be worth a watch. Square has been witnessing solid growth from all its revenue drivers.

Related: Will the stock market be fair to Square?

Acquisitions like Weebly and Zesty are expected to act as a tailwind in the near future. The food-ordering platform Caviar is also going to be a key catalyst for services-related revenue growth in the quarters to come. The payment platforms recent announcements like the launch of Square Payroll and Payments SDK platform are going to be complementary to the existing product offerings which would help the company to retain sellers into its platform for the long term.

Earlier this month, Shopify (SHOP) reported Q4 results which surpassed estimates. However, the revenue growth rate decline has been a concern for investors resulting in the stock decreasing 6% after the results were announced.

All eyes will be on Jack Dorsey and his team coming Wednesday to see it pulls off yet another stellar quarter better than the peers, which would justify the high valuations it is commanding right now.