A look at factors that make CrowdStrike (CRWD) a compelling buy

At the end of the first quarter, the company had 17,945 subscribed customers, up 57% from last year

The demand for anti-virus software and cybersecurity solutions escalated as organizations shifted to remote/hybrid work models and moved their digital assets to cloud platforms. The already-thriving cybersecurity market got a major boost as data protection and malware detection assumed greater significance in the changed scenario.

CrowdStrike Holdings, Inc. (NASDAQ: CRWD), which revolutionized cybersecurity with its cloud-native platform Falcon and gained a foothold in the market in a short time, is a beneficiary of the recent demand spike. The company’s disruptive technology helped it gain an edge over traditional security software providers.

The Austin-based firm’s stock has retreated about 18% so far this year. Like most others in the tech space, CRWD declined steadily after peaking six months ago. The market’s response to the company’s impressive first-quarter numbers this week was not very encouraging – the stock slipped to a new low, before recovering modestly.

The good news is that the recent stock performance is not reflective of the company’s financial health, rather the value is poised to bounce back and breach the long-term average in the coming months. Being a market leader in the fast-growing industry, CrowdStrike looks well-equipped to protect organizations from many challenging cyber threats through its advanced solutions. The strong fundamentals and healthy cash flows make it more attractive. The company has delivered stronger-than-expected earnings performance in every quarter since going public a few years ago. 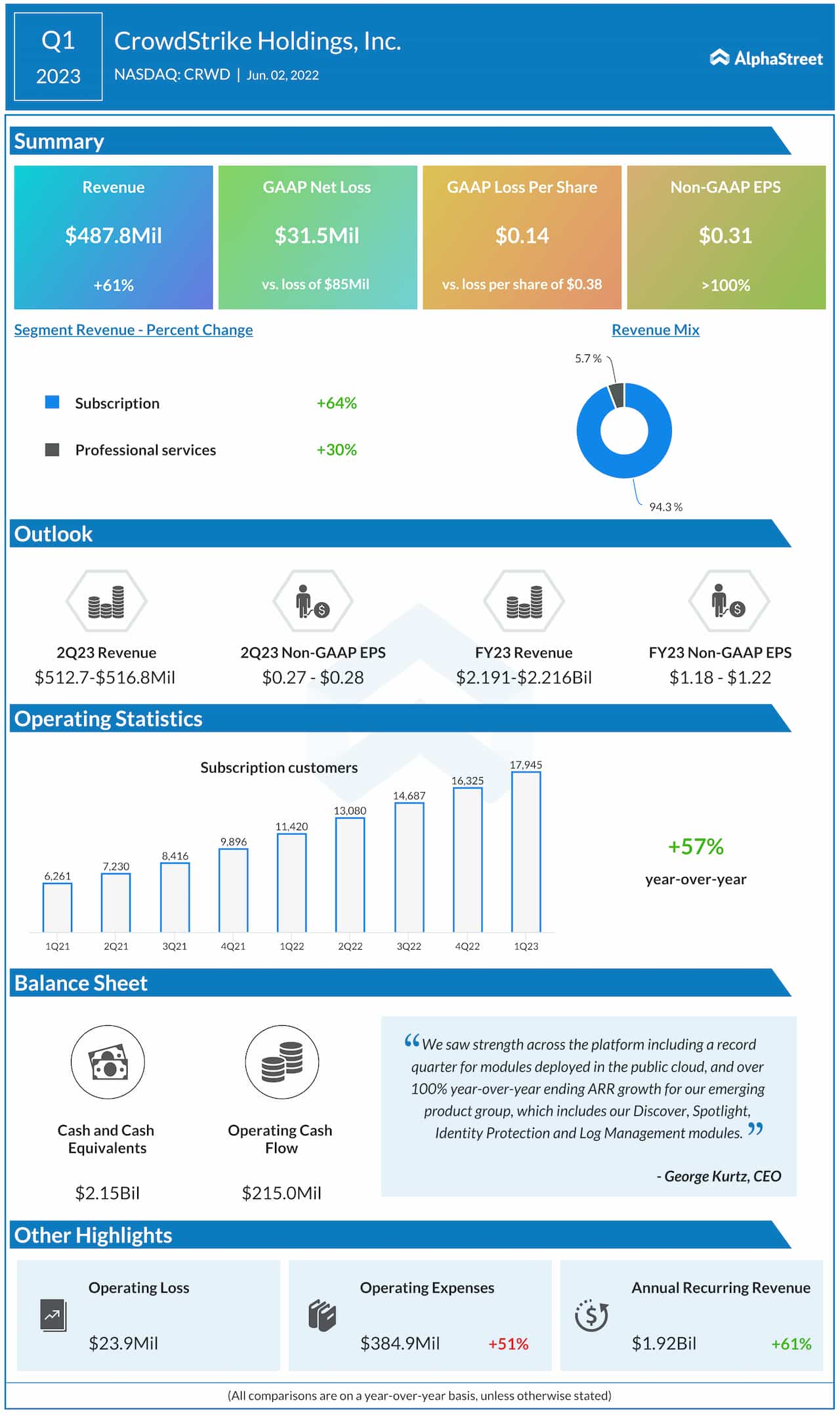 CrowdStrike’s advanced products, featuring specialized databases and supported by artificial intelligence, help it detect threats effectively on computing devices including laptops and smartphones. The flagship Falcon platform is very popular among large enterprises due to its efficiency and flexibility. Taking its malware detection capabilities to the next level, the company has launched what it calls XDR, which is designed to monitor online gateways and cloud workloads, among others.

“The demand environment we see is more robust today than this time last year as cybersecurity is not discretionary. Additionally, the competitive environment has remained favorable to CrowdStrike. Our growing leadership in the market is reflected in IDC’s most recent report where CrowdStrike leapfrogged to the No. 1 position among all vendors in the 2021 market share for worldwide corporate endpoint security and once again took the top spot in modern endpoint security,” said CrowdStrike’s CEO George Kurtz during the post-earnings discussion.

CrowdStrike entered the new fiscal year on a positive note, registering strong growth in sales and profitability in the first quarter. The management is bullish about the current quarter and full fiscal year and raised its guidance for those periods. At the end of the three-month period, the company had 17,945 subscribed customers, up 57% from last year. Revenues jumped 61% to $488 million and topped expectations, mainly reflecting a sharp growth in the subscription business. Adjusted earnings more than doubled to $0.31 per share, beating the estimates.

The post-earnings weakness that surprised many continued Thursday and CRWD ended the session lower. It seemed that investors were looking for a bigger beat for the first quarter. The stock has been trading below its 52-week average since last month.