AMD sees a promising year ahead amid unprecedented chip demand

The technology market is currently facing a major chip shortage, even as suppliers struggle to meet the unprecedented demand growth triggered by the mass adoption of digital technology. For semiconductor giant Advanced Micro Devices, Inc. (NASDAQ: AMD), capacity expansion and product launches are the top priorities now. The company generated record-high revenue last year on the strength of its popular Ryzen and EPYC chips. 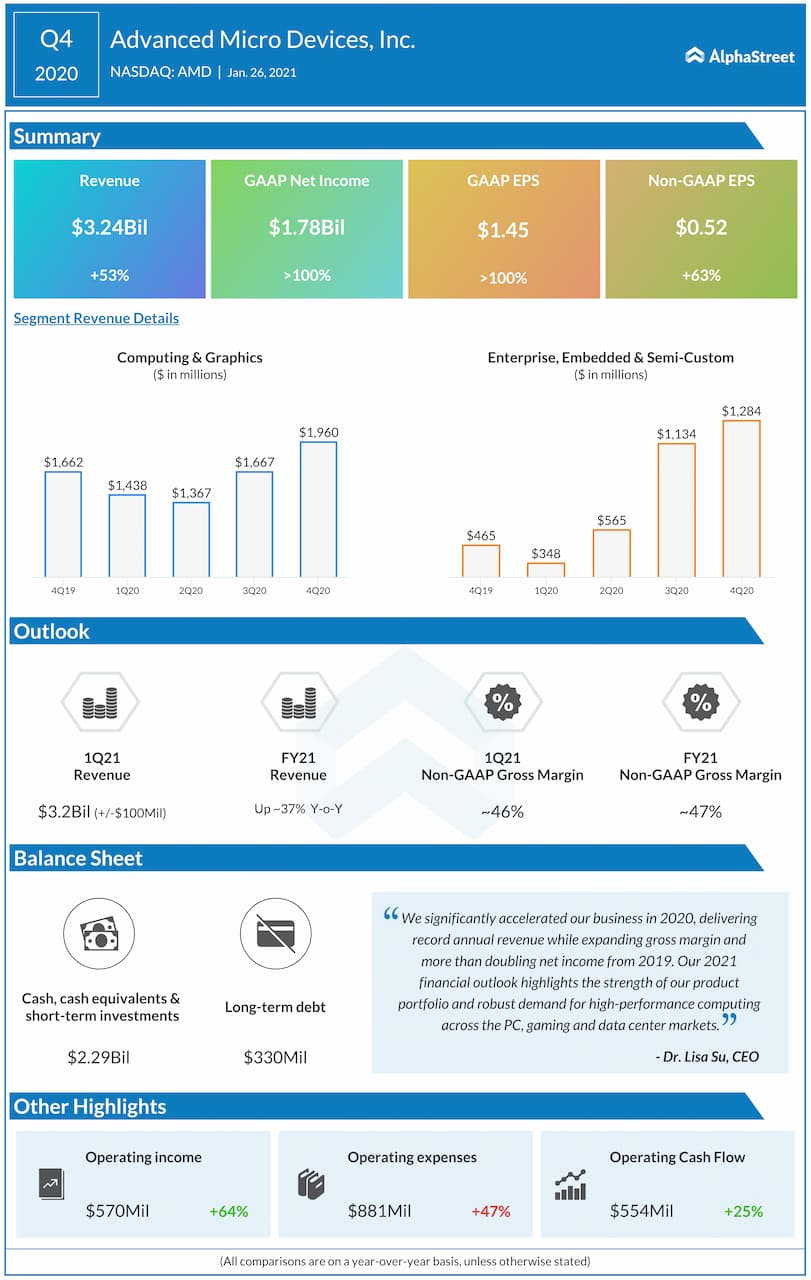 AMD’s stock has stayed unaffected by the pandemic since its onset and maintained stable momentum throughout last year. After withdrawing from the recent peak, the stock regained strength this week. While the price is seen growing double-digits this year, the dip in valuation makes the stock an attractive investment.

The recovery of the PC market and the spike in video game consumption during the COVID-related shutdown, combined with data center expansion and cloud adoption, contributed to the recent sales growth. In an effort to take on rivals like Intel Corp. (INTC), the company recently rolled out its third-generation EPYC processor for data-center. The new Ryzen Pro 5000 mobile processors featuring Zen 3 core also hit the market this week, with more launches expected in the coming months.

“We expect our data center business to accelerate in 2021 as we further extend our performance, efficiency and TCO leadership with the launch of our next-gen server processors codenamed Milan. Milan production began in the fourth quarter as planned with initial shipments to cloud and HPC customers. We are very pleased with the performance of Milan. We conducted the first public preview of Milan at CES, highlighting 68% better performance compared to two of the highest-end dual-socket processors from our competition when running a compute-intensive whether modeling simulation.”

AMD’s earnings have either matched or beat analysts’ predictions in the past several quarters. In the fourth quarter, revenues of the server segment nearly tripled, driving up the top-line by 53% to $3.2 billion and above the forecast. Consequently, adjusted earnings surged 63% to $0.52 per share and topped the Street view.

With non-core markets like the automotive industry being hit hard by the chip shortage, the future looks bright for CPU suppliers like AMD. That said, the semiconductor industry is highly competitive and cyclical in nature, which casts a shadow on its prospects at a time when the market is experiencing high volatility.

Meanwhile, a special meeting is being planned next month to seek shareholders’ approval for the proposed acquisition of Xilinx by AMD. Earlier, the $35-billion deal got the green signal from the boards of directors of the companies.

After hitting an all-time high towards the end of last year, AMD’s stock pulled back and slipped to a five-month low this month. The value more than doubled in the past twelve months. The shares traded higher in the early hours of Tuesday, after closing the last session higher.