American Airlines (AAL) is set to gain altitude in 2023. Here’s why

American Airlines Group (NASDAQ: AAL) has returned to profitability after languishing in the negative territory for a long time, following the COVID-related travel ban. The aviation giant is expected to regain most of its lost momentum this year, helped by the steady increase in passenger traffic.

After trading below its long-term average last year, American Airlines’ stock entered 2023 on a high note, gaining about 33% in the first two weeks. Prior to that, it had traded at a two-year low since mid-2022. There would be a natural urge among investors to make use of the recent dip in valuation, which is justified to a large extent.

However, there are risks like the squeeze on people’s spending power due to inflation and interest rate hikes. It is estimated that the stock would trade sideways until passenger traffic recovers fully, which makes it a less attractive investment option from the short-term perspective.

Underscoring the positive outlook for air travel, after a relatively weak holiday season, the management recently raised its guidance for fourth-quarter revenue growth to 16-17%, compared to the same period of 2019. Earnings per share guidance has been raised sharply to $1.12-1.17, while it continues to expect Q4 capacity to be down about 6.1%. It looks like the company is on track to achieve the goal of reducing debt significantly by 2025, using the additional cash it expects to generate. Currently, total debt is much higher than the pre-COVID levels.

Going forward, a potential growth catalyst would be the company’s planned alliance with JetBlue Airways — if the deal gets anti-trust clearance from regulators. Post-deal, JetBlue will be adding more routes from New York, Boston, and Los Angeles, contributing to Americans Airlines’ revenues. Meanwhile, the company remains committed to its strategy of simplifying the feet and focusing on flying on profitable routes. 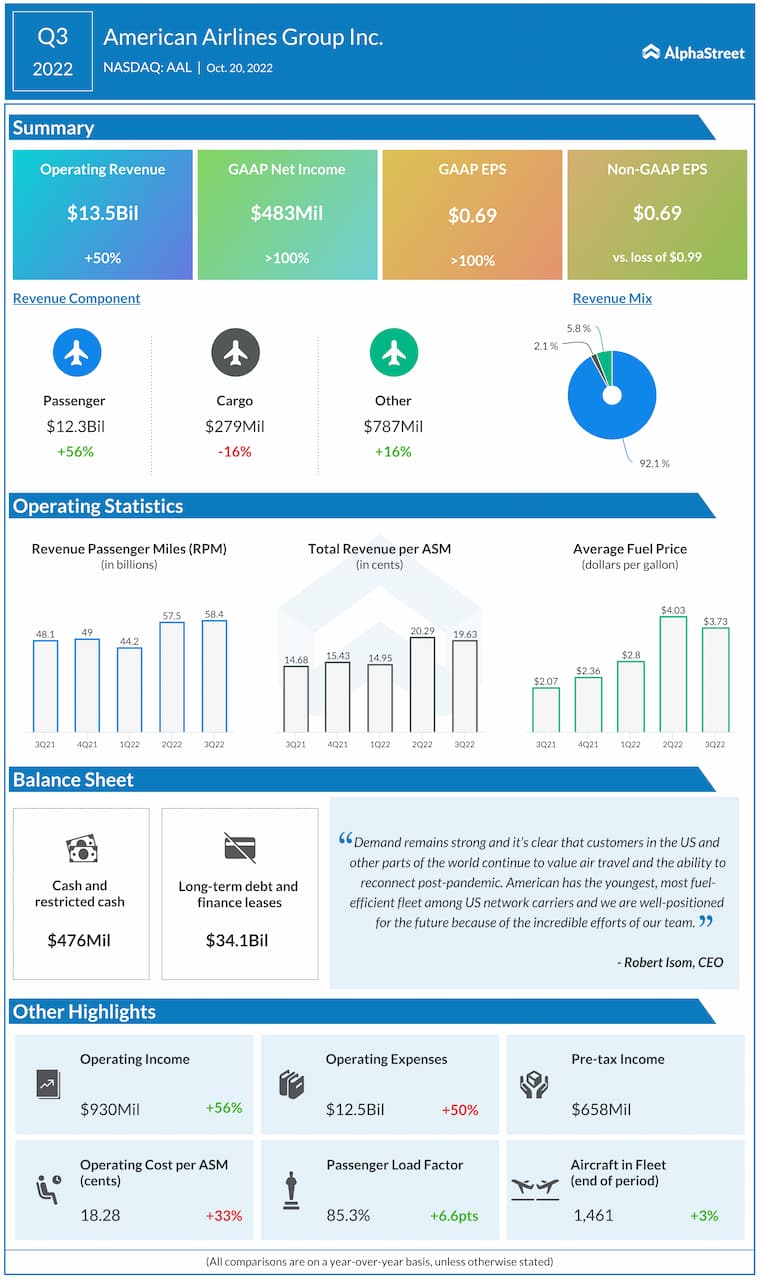 In the most recent quarter, American Airlines turned to profit from a loss in the prior year, marking the second quarterly profit after three consecutive losses. At $0.69 per share, adjusted earnings also topped expectations after missing in the previous quarter. The bottom line got a boost from a 50% growth in operating revenue to $13.5 billion.

The company will be publishing results for the final three months of 2022 on January 26 before the opening bell. Indicating that recovery would continue, market watchers predict a profit of $0.83 per share for the fourth quarter, on revenues of $12.95 billion. However, analysts are not as bullish as the management because they seem to be skeptical about the company’s ability to sustain the momentum.

“Leisure and business revenue remain incredibly strong again surpassing 2019 levels in the third quarter. Demand for small and medium-sized businesses and customers traveling for a combination of business and leisure continues to outpace the recovery of managed corporate travel. As that revenue continues to build, they’ll be additive to an already strong base business demand, let’s say, small and medium business and blended trips.”

Southwest Airlines: A look at the plans the airline has outlined for the near term

On Tuesday, shares of American Airlines traded slightly above $17, continuing the recent recovery. The current value is close to the level seen a year ago.