Earnings Preview: Will Citigroup spring a surprise in Q1 amidst tough headwinds?

Citigroup (C) is scheduled to report its first-quarter results on Monday before the bell. The banking giant is reporting its results after its rivals JPMorgan and Wells Fargo reported solid results on Friday despite tough macros. Investors would be expecting Citi to mimic its peers on April 15 when it unveils the Q1 results.

The banking major has started off well this year with the stock up 29% compared to 13% surge in JPMorgan’s shares and a modest 1% growth in Wells Fargo. However, whether Citi would continue the momentum into the second half of this year would depend on the bank’s performance in the Q1 period and the outlook provided by the management on Monday.

For the Q1 period, analysts are expecting earnings to increase 7% touching $1.8 per share on revenues of $18.63 billion. When it comes fiscal 2019 period, the street is estimating a 12% jump in earnings and a 2% spike in revenues.

On a separate note, yesterday the bank announced that Jamie Forese who has been heading the Institutional Clients Group (ICG) is leaving the firm. He will be succeeded by Paco Ybarra, who is currently Forese’s deputy head of the ICG. The announcement came as a surprise to investors because Forese was touted as the most probable candidate to replace the current CEO Michael Corbat.

It’s worth noting that ICG division brings in nearly 50% of the total revenues to Citi. More importantly, the division last year contributed nearly 68% to the bottom line. Shareholders would be interested in knowing how Ybarra would take the division forward. ICG’s revenue growth has been muted over the last five years.

All the banking firms including Citi have been hurt by lower trading revenues, especially on the fixed-income side. Analysts will be expecting updates from Ybarra on the division’s outlook when he takes on his new role from May 1.

Citi’s expense management initiatives would continue to be a tailwind in the fiscal 2019 period. However, trading revenues would continue to hurt the bank in the first quarter similar to its peers due to a tough macro environment. Investment banking revenues would be impacted in the Q1 due to lower underwriting fees dragging ICG’s performance, following the last quarter’s trend.

Consumer business top line grew 3% last year, down 1% over the prior year period. The drop in performance was due to lower non-interest revenues from the North American region impacting the division’s revenues. However, the bank expects the trend to reverse in 2019 overcoming the headwinds.

Citi also sees interest revenues to improve in the current fiscal period. If there is a slump in economic growth, then the Consumer segment might witness a dent in performance from the retail banking and credit card businesses.

As part of its cost-cutting efforts, Citi today announced that it has acquired the 25 Canada Square office facility in London for $1.3 billion. The bank has been operating out of the facility for nearly two decades on a long-term lease. With this purchase, the bank is expected to save leasing-related expenses in the years to come.

Last quarter, Citi reported a jump in earnings, surpassing analyst estimates. The increase in profits was primarily due to the ongoing cost-cutting activities undertaken by the bank. On the flip side, revenue failed to beat expectations due to a drop in fixed-income trading revenues. 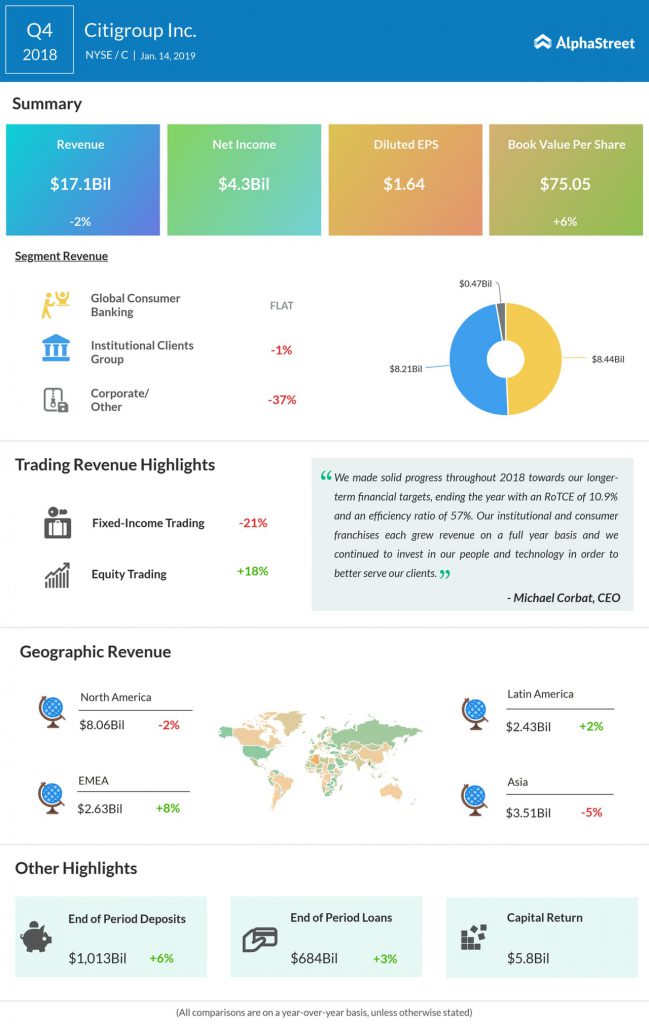