DICK’S Sporting Goods Inc. (DKS) Tuesday reported Q4 earnings that were in line with the street expectations, even as net sales surpassed the consensus. However, the stock fell over 6% in premarket hours on Tuesday, as investors were disappointed with the weak sales outlook.

Net sales dropped 6.5% to approx $2.49 billion from the same period last year. But this came in slightly above analysts’ estimate of $2.48 billion.

Comparable store sales of the Coraopolis, Pennsylvania-based firm contracted 2.2% when adjusted for the calendar shift due to the 53rd week in fiscal 2017. Without this adjustment, consolidated same-store sales for the fourth quarter decreased by 3.7%.

Adjusted for the calendar shift, eCommerce sales rose 17% during the quarter while eCommerce penetration was approx. 23% of total net sales.

Net income fell to $1.07 per share from $1.11 per share a year ago but was in line with the street projection. 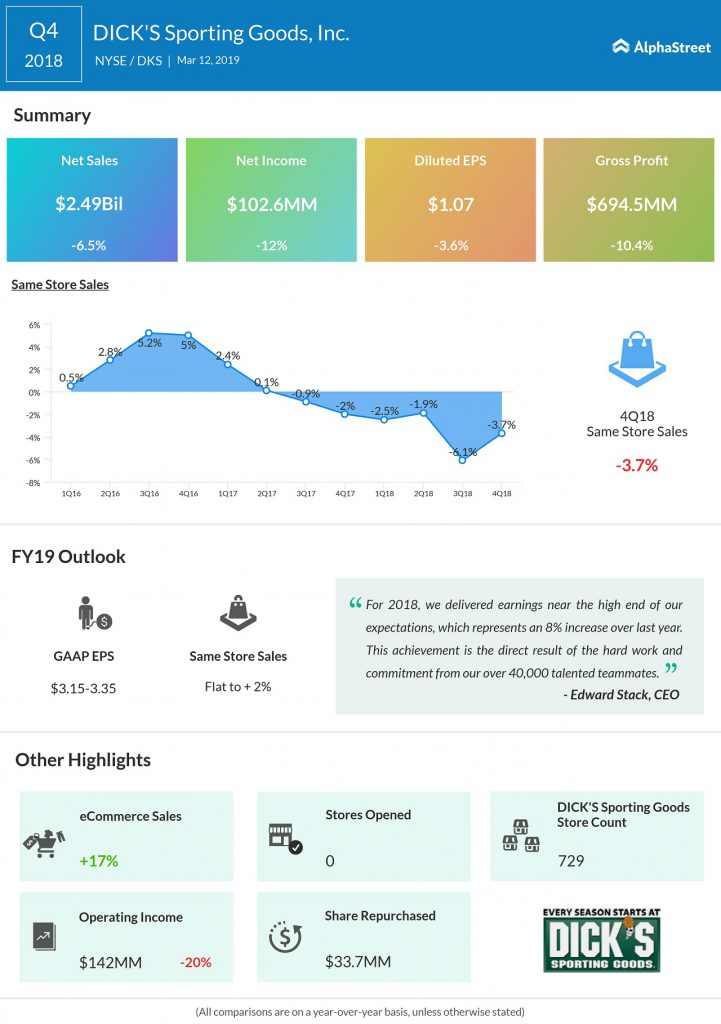 CEO Edward Stack said, “As we look forward to 2019, we are enthusiastic about our business and expect to return to positive comp sales beginning in the second quarter.”

In recent years, the company’s electronics and hunting segments have witnessed a sharp decline, which can be attributed mainly to the curbs imposed by the government on firearm sales. Last year, the company had decided to stop the sale of assault-style guns and ammunition to youngsters.

Among the other sportswear companies, Under Armour (UAA) last month posted a 2% increase in revenues to $1.4 billion, generating earnings of $0.09 per share, on an adjusted basis.

Dick’s Sporting’s shares have jumped about 18% in the past 12 months, despite the volatilities, and outperformed the S&P 500 index. The stock has maintained a steady uptrend since the beginning of 2019, recovering from the lows seen towards the end of last year.