General Motors (GM) is on track to beat pandemic blues; bullish on EV

The recent performance of leading automotive manufacturers shows that after being hit by the virus outbreak early last year, the industry stabilized sooner than initially expected. For auto giant General Motors (NYSE: GM), the prevailing chip shortage could be a bigger headwind to future growth than the pandemic.

Though the Flint, Michigan-based carmaker slipped into a loss in the early months of COVID, it managed to get back on track pretty quickly with earnings that surpassed the market’s projection, a trend that continued in the past several quarters. North America, the core operating segment, continues to be the main growth driver led by trucks and SUVs.

The company’s year-end financial report elicited mixed response as the positive sentiment was offset by the management’s bearish outlook for fiscal 2021, citing the global chip shortage triggered by a spike in demand. That set off a selloff and GM’s market value dropped about 4% in the last two days. On the positive side, the recent dip in valuation has made the stock an investment option that is too good to ignore, with analysts’ bullish outlook making it more attractive. Experts see a 12% growth in the next twelve months.

Recovery from the COIVD-related production disruption was hampered by the widespread vehicle recalls to fix faulty airbags in November, but it had a limited impact on GM’s financial performance. Currently, executives bank on the stable demand for the company’s popular models and its aggressive EV push to drive long-term growth, besides the demand recovery in the rapidly growing Chinese market. It is worth noting that the company last year saw the biggest annual growth in its US market share in more than two decades. 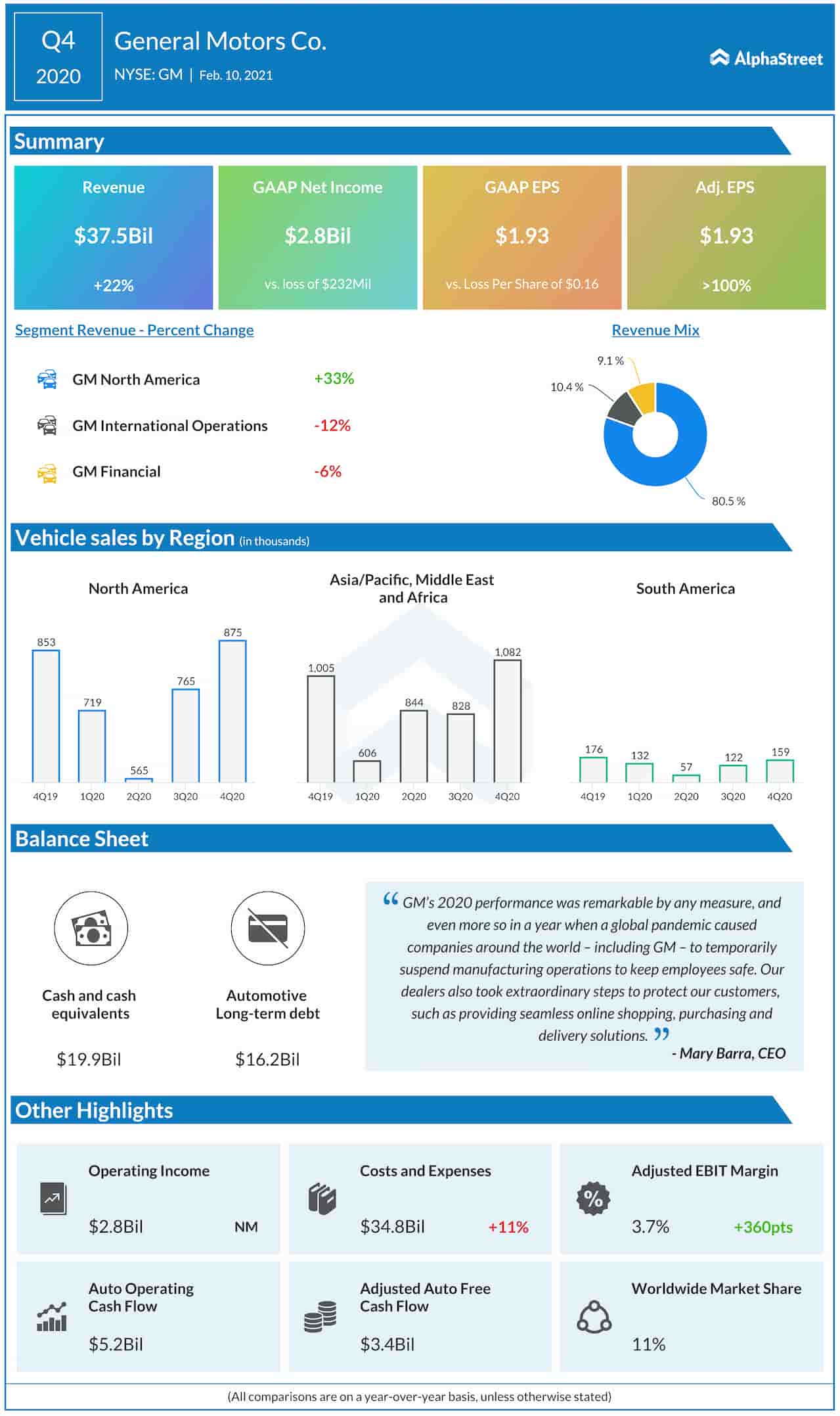 GM plans to increase investments in its electric vehicle and autonomous vehicle projects to $27 billion in the next five years — with one-fourth of that amount earmarked for this year – targetting to roll out as many as 30 electric vehicles globally during the period.

GM’s CEO Mary Barra said while speaking to analysts at this week’s earnings conference call, “We are fully committed to a capital allocation strategy that invests in new and existing businesses to drive growth. We’re going to generate that growth through our EV portfolio as well as businesses like BrightDrop, OnStar Insurance Services, subscription services like Super Cruise and OnStar Guardian, and much more to come from our growth and innovation team. The semiconductor shortage won’t slow our growth plans and with our mitigation strategies, we still expect a very good year for General Motors, and Paul will share additional details in his remarks.”

In the fourth quarter, earnings came in at $1.93 per share, on an adjusted basis, representing a marked improvement from the year-ago period when the company earned just 5 cents per share. The North American business grew by a third, more than offsetting weakness in the other segments, and drove up total revenues by 22% to about $38 billion.

Like most other businesses, the automotive industry is hit by the acute supply shortage of microprocessors due to the mass shift to remote work and digital classrooms across the world during the shutdown. The management believes the issue is short-lived and vows to have the remedial measures in place, but the shortage could dent GM’s profitability this year.

In a rally that surprised everyone, GM’s stock recovered steadily from the virus-induced slump and reached an all-time high earlier this week, but lost steam after the earnings report. The stock has gained 33% in the past one-and-half months.