It’s worth keeping an eye on Vertex Pharma (VRTX) stock. Here’s why

After dominating the cystic fibrosis market for quite some time, Vertex Pharmaceuticals Inc. (NASDAQ: VRTX) is currently expanding its clinical programs to other diseases. While the initiative is widely seen as a prudent move aimed at maintaining growth in the long term, it might come under scrutiny due to the challenges involved.

The majority of analysts following Vertex’s stock are bullish on its growth prospects, with estimated gains of 28% in the 12-month period. Struggling to recover from prolonged weakness, currently, the stock is much more affordable than it was a year ago. In October last year, it shed about a fifth of its value in a single day. With recovery hopes intact, the shares offer a buying opportunity investors wouldn’t want to miss. The low valuation also makes it attractive.

What’s happening on the COVID-19 front? Here are a few updates

The Massachusetts-based biotechnology company’s pipeline got a boost last year after it advanced a number of clinical programs and ventured into new disease areas. The blockbuster launch of lead drug Trikafta — a triple combination regimen for cystic fibrosis — a couple of years ago was a major milestone for the company. While it continues to cash in on Trikafta’s dominance in the segment, with hardly any competitor out there, the party will likely be over once its patent expires in 2037. But, that’s a long time.

Since Vertex’s key products were approved and launched only in the recent past, they have a great potential to further expand market share, which bodes well for the company. Being confined to the cystic fibrosis arena – Kalydeco, Orkambi, Symdeko, the only other approved drugs, are also indicated for cystic fibrosis – could become both an advantage and disadvantage in the long run.

After the stable revenue performance in recent years, Vertex now has a strong balance sheet – cash balance stood at $6.7 billion at the end of 2020, up 75% from the previous year. A significant portion of the cash will be used for investing in innovation. 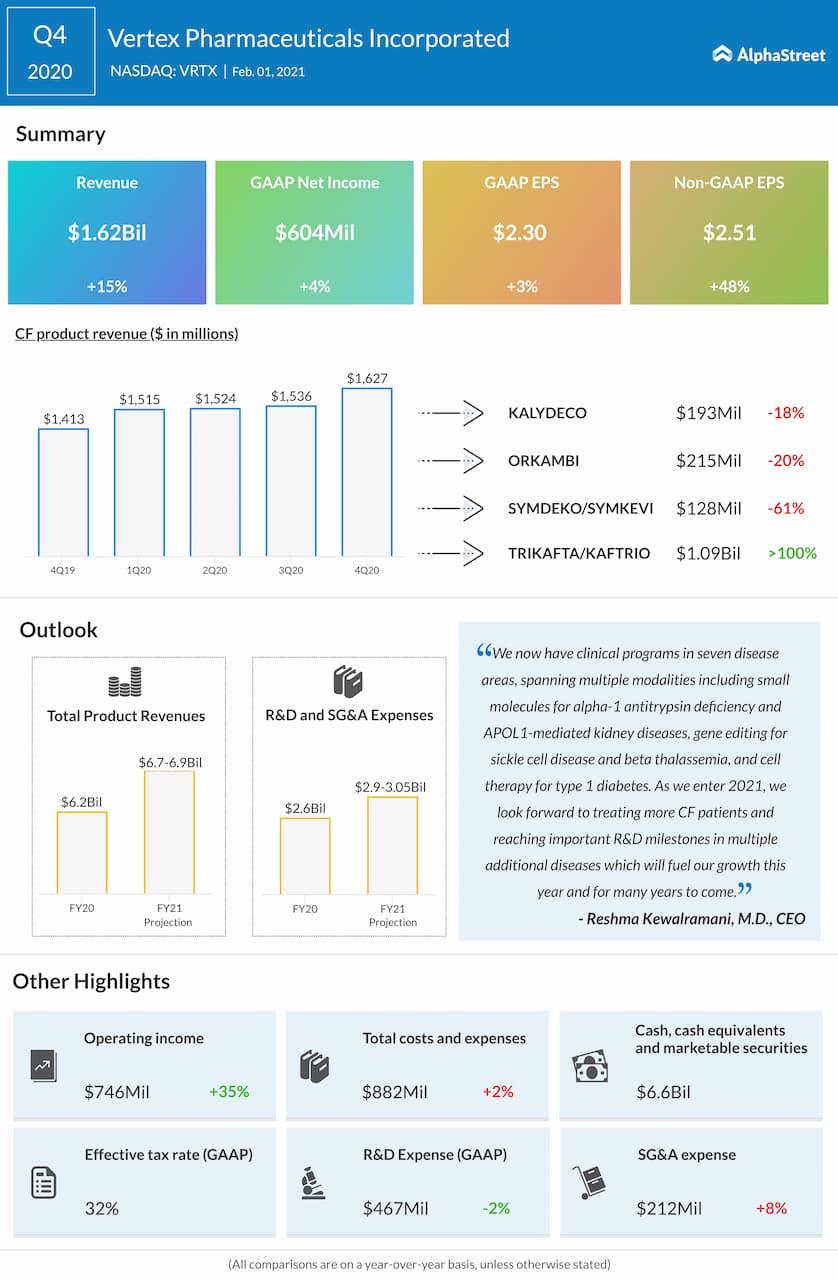 “In 2021, our commercial focus now turns to maintain the very high rates of persistence and compliance that we have seen to date. And we anticipate that these rates will normalize over the coming months. We expect the majority of near-term growth for TRIKAFTA in the US to come from approvals in rare mutations and younger age groups. TRIKAFTA was recently approved for patients 12 and older with rare mutations. And the FDA recently accepted the sNDA for six to 11-year-olds and granted it priority review. We expect approval around mid-year. In Europe, enthusiasm and interest in KAFTRIO amongst the CF community are high.”

There was disappointment among Vertex’s shareholders when it posted weaker-than-expected earnings a few weeks ago, after beating experts’ forecast consistently for several years. Adjusted earnings jumped 48% year-over-year to $2.51 per share in the fourth quarter but fell short of expectations. Revenues advanced 15% to $1.63 billion and exceeded the projection. The top-line benefited from stable sales of Trikafta both in the domestic market and Europe.

Shares of Vertex have been in a downward spiral for a long time, losing about 20% in the past twelve months. The downtrend continued in the early weeks of the year, but the stock stabilized later raising hopes of a recovery. It traded slightly higher early Tuesday.