Kohl’s (KSS) looks headed for another strong year. Is the stock a buy?

Kohl’s Corp. (NYSE: KSS) is yet to fully recover from the sales slump triggered by the widespread store closures after the coronavirus outbreak. Initially, the department store chain lagged behind its peers in leveraging the online shopping boom due to its relatively weak eCommerce capabilities. However, online sales picked up steadily last year as more customers started using its digital platform.

KSS is probably the worst-affected retail stock from the COVID-induced business disruption – it plunged to the lowest level in more than two decades in early 2020. After languishing in multi-year lows for several months, the stock has regained most of the lost momentum and is trading close to the $50-mark. Going by experts’ predictions, the stock looks poised to make a full recovery this year – gaining around 9% as per the current target price.

The Menomonee Falls-based retailer reported decent profits in the early phase of recovery, defying expectations of losses, and quarterly numbers exceeded estimates consistently since then. Also, the board of directors has agreed to double the quarterly dividend, which equates to an annual dividend of $2.00 per share.

The other factors that can bring cheer to investors are the management’s aggressive share buyback program and new merchandising initiatives. Currently, capital deployment is being planned with a focus on store refreshment and expansion of the Sephora partnership.

Kohl’s bottom-line performance improved in recent quarters supported by the management’s cost reduction initiatives. The resultant improvement in liquidity helped the company repay a part of its long-term debt. Most importantly, digital sales are growing consistently, contributing to top-line growth. 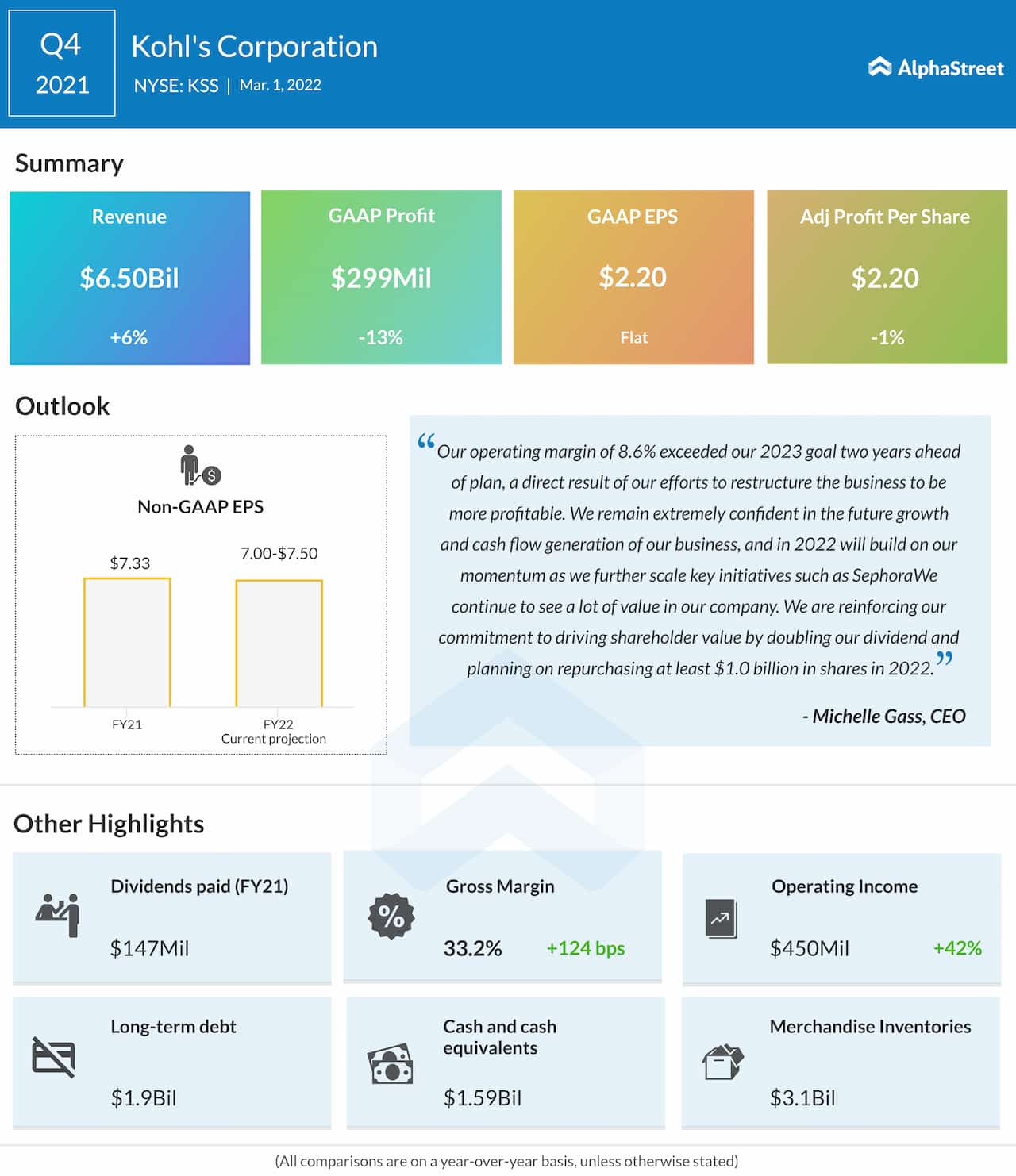 Kohl’s ended the last fiscal year on a mixed note, reporting a modest decline in fourth-quarter earnings despite an increase in revenues. The highlight of the Q4 report was an increase in operating margin to 8.6%, which is above the target set for 2023. Net sales increased 5.8% annually to $6.22 billion, while earnings edged down to $2.20 per share.

“2021 was an important and pivotal year for Kohl’s. We accomplished a great deal strategically and financially as we’ve highlighted today. Given the strong growth initiatives in front of us, we have great confidence in the future. We are focused on driving shareholder value and are reinforcing our commitment to returning capital to shareholders. We are doubling our dividend, and our Board has approved a $3 billion share repurchase authorization, with a plan to repurchase at least $1 billion in shares in 2022,” said Michelle Gass, chief executive officer.

Deal or No Deal

Of late, the market has been abuzz with speculation that Kohl’s would be acquired by Amazon.com (NASDAQ: AMZN), taking their ongoing partnership to the next level. However, neither of the companies has issued any statement in this regard. Recently, the management came under pressure from activist investors to sell the business to enhance the stock price.

WMT Earnings: All you need to know about Walmart’s Q4 2022 earnings results

Kohl’s stock has gained as much as 20% this year so far, often outperforming the market. The shares closed Wednesday’s regular trading higher but dropped in the after-hours.