Spotify once again surprises Wall Street with a profit in Q4, but shares dip

Spotify Technology S.A. (SPOT) on Wednesday reported a 30% jump in fourth-quarter revenue to €1.495 billion ($1.70 billion), in line with the projections set by Wall Street analysts. The top line was helped by a 36% increase in premium subscribers.

The Swedish firm’s shares fell 7% during pre-market trading as investors were unhappy with the top line performance. The stock has gained 5.6% since its public listing in April, last year.

Meanwhile, the music streaming giant reported earnings of €0.36 ($0.41) per share, against a Wall Street projection of a $0.24 per share loss. 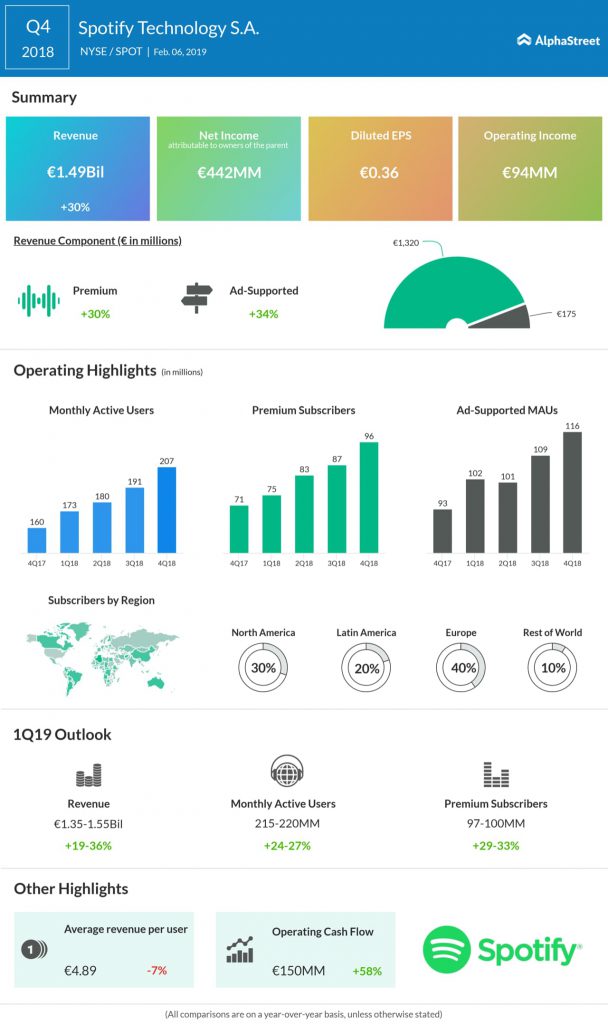 Monthly active users (MAU) grew 29% to 207 million at the end of Q4, primarily due to strong growth in Latin America and other emerging markets. Driven by better-than-expected intake
from our Google Home promotion and annual Holiday campaign, premium subscriber base jumped 36% to 96 million during this period.

Average revenue per user (ARPU), meanwhile, slid 7%. The company attributed this decline to the increasing popularity of Family Plan and Student Plan.

Marking its foray into podcasting, the Swedish firm had yesterday announced that it was acquiring podcast startups Gimlet Media and Anchor for undisclosed amounts.

Spotify chief Daniel Ek also stated that he was looking to spend $400-500 million in acquisitions this year.

In the previously reported quarter, Spotify had defied Wall Street expectations for a loss by posting a profit. However, the music streaming platform’s revenue missed street projection, pulling the stock down shortly after the announcement.

Read: These 2 tech startups may follow Spotify’s method of direct listing over IPO in 2019

Despite posting robust revenue growth and steady rise in monthly active users (MAU), shareholders are yet to feel comfortable about the stock. In the past six months, SPOT has slipped 24.8% compared to a 15% slide in its industry.

One thing to notice is how Spotify is performing better in emerging markets, much better than established markets with respect to MAU growth.

But these regions, especially geographies like Latin America and Southeast Asia offer lower average revenue per user (ARPU) coupled with the negative headwind of forex rates.