Earnings Preview: Will hopes of merger save Sprint from the impending doom in Q3?

While the telecom market is experiencing quite a high time after the launch of 5G in some parts of the world, another giant in the sector Sprint Corporation (S) is ready to post its results on January 31st.

While the market estimates a loss of $0.02 per share on revenue of $8.40 billion in its third quarter of 2018, the trend so far might lead to another surprise. If indeed Sprint manages to post a profit, the stock will definitely rally. Else, it’s best to assume that this giant has truly fallen.

It’s not all hunky-dory for Sprint, as recently analysts have cut their estimates to 13.6% lower in the last one month. This could also indicate the steady decline in shareholder confidence of the stock.

While news of the Sprint-T-Mobile merger has been around for a long time, it was only in the middle of last year that they finally announced a merger. What followed was a flurry of regulatory hearings.

However, there are indications that the deal would close sooner than expected in the first quarter of 2019. T-Mobile (TMUS) CFO J. Braxton Carter said in Barcelona last November that the only thing remaining was the depositions with the Department of Justice.

Once the $26-billion deal closes, both companies are of the view that the merged entity would be better placed to take on the competition from AT&T (T) and Verizon (VZ).

It was in this same quarter that Verizon launched its new offering — the world’s first commercial 5G broadband internet service, in some markets. The Verizon 5G Home was first offered to some parts of Houston, Indianapolis, Los Angeles, and Sacramento

LOOKING BACK AT THE SECOND QUARTER

In the previously reported second quarter, Sprint turned to profit on revenue jump due to stable subscription growth. This defied analyst expectations for a loss. Shares of the company then gained around 6% following the results announcement. 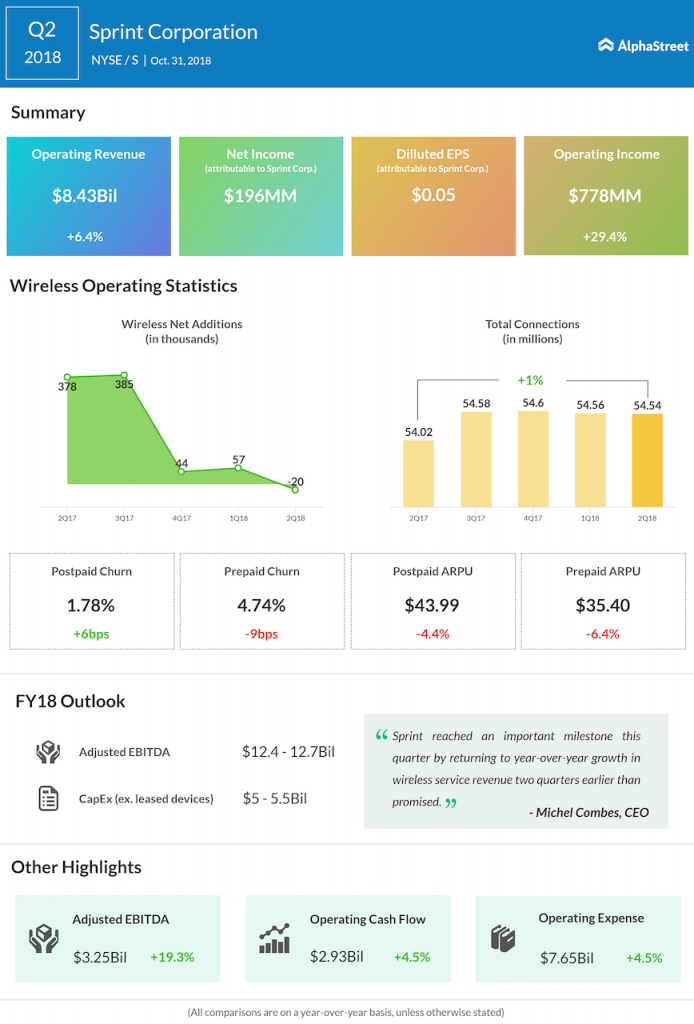 Sprint has then raised its full-year adjusted EBITDA outlook to $12.4-12.7 billion from its previous forecast of $12.0-12.5 billion. Annual cash capital expenditure is now expected to be $5.0-5.5 billion.

With Sprint management expecting that a projected two-fold increase in network speed after the nationwide deployment of LTE Advanced features, along with prospects of the new 5G technology, Sprint could really turn around this quarter.