The management expects full-year wireless service revenue, adj. EBITDA and adj. EPS to come in towards the lower end of its prior guidance range

The telecommunications industry is witnessing a major transformation, with the rapid adoption of new technologies like high-speed broadband and Internet of Things setting new trends. Verizon Communications Inc.  (NYSE: VZ) is well-positioned to tap into emerging opportunities like 5G Home wireless broadband, thanks to the telecom giant’s aggressive investments in key growth areas.

The New York-based company’s stock suffered a heavy loss last week following the first-quarter earnings announcement — probably the worst fall in many years. Investors became concerned about the weak earnings performance and muted guidance, though the stock has created sustainable shareholder value over the years.

A positive effect of the selloff is that VZ has become more affordable, offering a rare buying opportunity that is worth pursuing. It is a temporary setback that might not have any long-term impact on the company, which enjoys a competitive edge and is capable of generating strong return on capital consistently. However, when it comes to short-term investment, the stock is a bit risky due to its not-so-encouraging prospects for the near future.

The company’s innovative business model – with both the wireless and broadband segments performing well — together with the favorable valuation and impressive dividend yield of above 4%, make it a good long-term bet. So, it makes sense to keep an eye on the stock and wait until the right time comes before buying.

The business is expected to get a major boost from the launch of the C-Band network earlier this year, targeting to reach at least 175 million people by year-end, and the expansion of the 5G Ultra-Wideband network. Those initiatives complement the management’s goal of generating an incremental $14 billion of service and other revenue by 2025. Overall, around three-fourths of total revenue growth is expected to come from 5G mobility and nationwide broadband during that period. 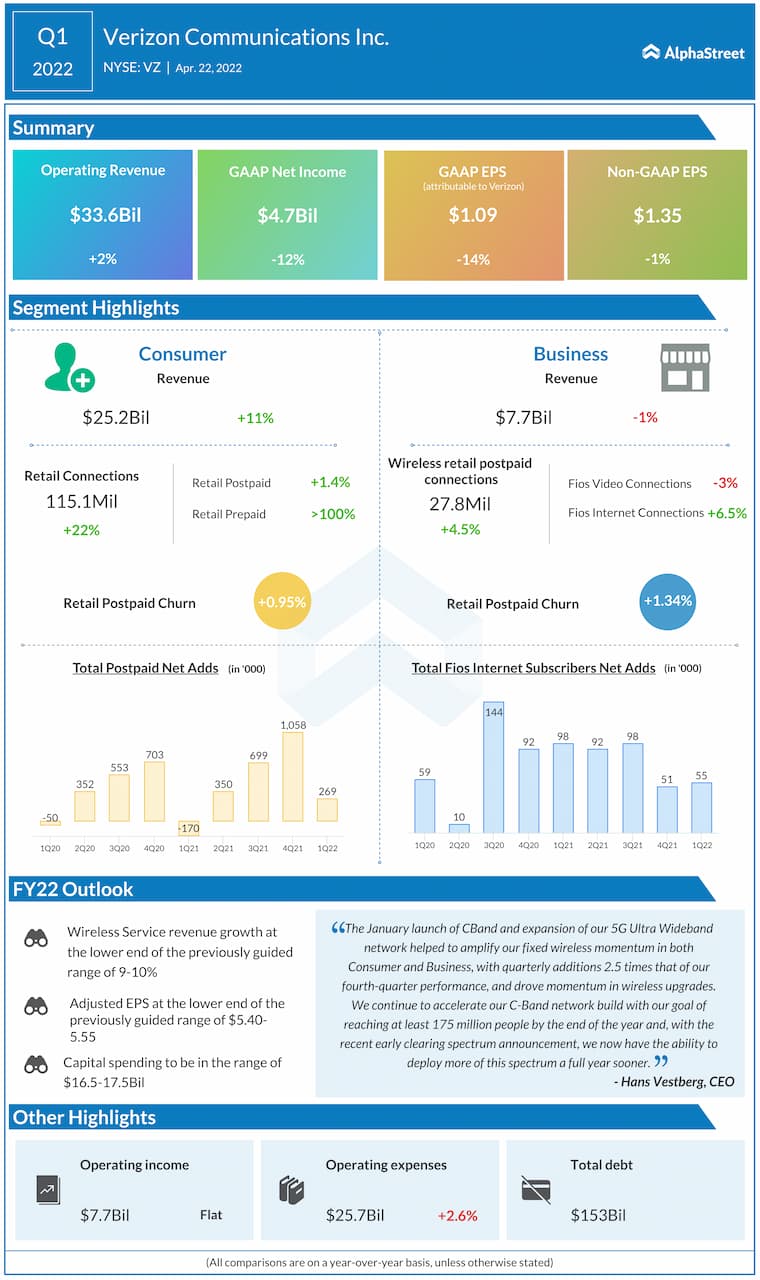 “As we previously mentioned, as technology megatrends further shift how we will work and live, 2022 is a year for Verizon to scale execution. The world continues to transition toward increased connectivity and the telecommunications industry’s role in building our future has never been more vital. Through our key investments across our portfolio of assets, we will continue to build on our unique competitive position in the industry and drive growth across all of our five vectors.”

The company reported $5.8 billion of capital expenditure in the most recent quarter, including fresh investments in the C-Band network that is well above the investments made by arch-rival AT&T Inc. (NYSE: T) and exceeds the industry average. It is worth noting that the company faces stiff competition from AT&T and other telecom players like T-Mobile US, Inc. (NASDAQ: TMUS).

Over the past two years, Verizon’s quarterly profit exceeded analysts’ forecast consistently despite the pandemic-related uncertainties. In the first quarter of 2022, revenues increased modestly to $33.6 billion, while adjusted profit dropped by a cent to $1.35 per share. The company lost about 78,000 video subscriptions during the three-month period, but its broadband user base grew at the fastest pace in more than a decade. Meanwhile, the management lowered its full-year outlook — currently expects adjusted EBITDA to grow at the lower end of the previous guidance range of 2-3%.

Walt Disney: Here are the two factors that drove an epic quarter for the House of Mouse

Verizon’s shares extended their post-earnings fall on Monday and traded at the lowest level since the beginning of the year, all along hovering near the $50-mark. They have lost around 13% in the past twelve months.