Gaming juggernaut Electronic Arts (EA) is slated to report its fourth-quarter earnings on Tuesday after the bell. EA’s peer Activision Blizzard (ATVI) recently reported a 10% drop in profit impacted by muted sales growth. The key metrics like bookings and monthly active users dwindled due to increased competition and lack of major releases. Take-Two (TTWO) is reporting its fourth quarter results on May 13.

Analysts are expecting EA to report adjusted earnings of 97 cents per share, down 26% over last year and sales to drop 4.4% of $1.2 billion. The company is guiding Q4 revenue of $1.16 billion and GAAP EPS of $0.56. Net bookings are expected to come in at $1.17 billion compared to $1.6 billion reported last quarter.

Digital sales bring in the majority of revenues to the EA’s top line. It would be interesting to see whether it’s matching the $1.1 billion recorded last year. Activision’s digital revenues saw a 5% dip this quarter, reflecting tough headwinds faced by the industry. 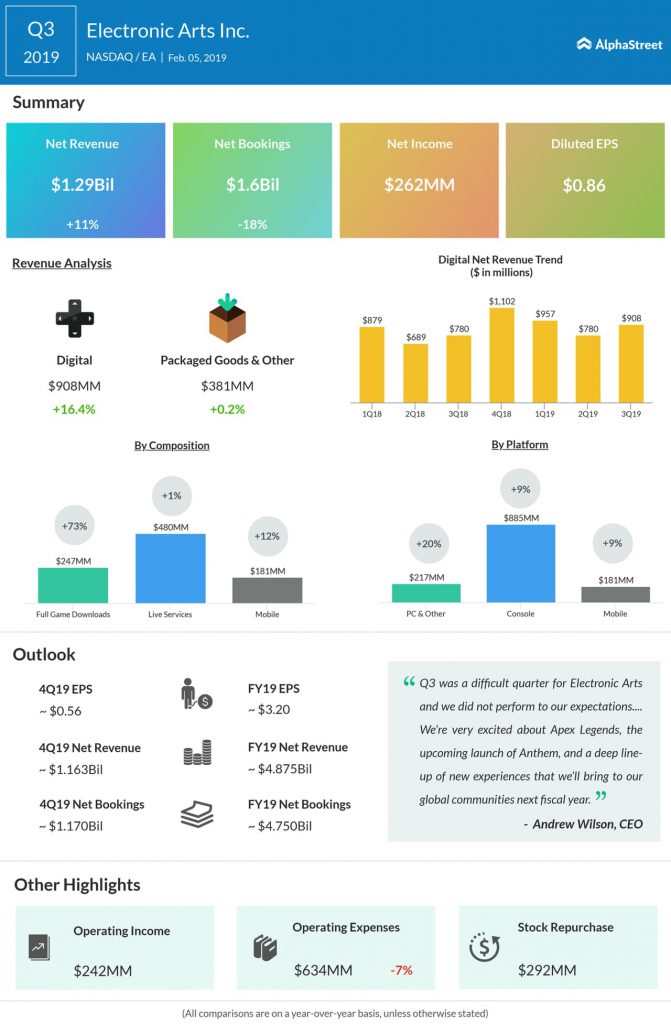 The emergence of battle royale genre

The gaming industry has been witnessing tectonic shifts in terms of consumer behavior. With mobile phones becoming ubiquitous, it’s the fast-growing and largest gaming platform with huge potential to see revenue growth in the near future.

In 2017, Epic Games unveiled Fortnite Battle Royale, a free-to-play multi-player game where gamers can access premium features by paying money. It’s become an instant hit where over 10 million gamers have played the game just within two weeks after launch. Fortnite is also one of the pioneers in providing cross-platform gaming option which makes it console-agnostic. Since then battle royale genre has become a rage within the gaming industry.

Fortnite has been the biggest money spinner for Epic Games right from the launch bringing in a profit of $3 billion last year. Epic’s valuation soared to $15 billion last October, which is a huge jump from $8 billion reported in July 2018. In March, Epic announced that Fortnite reached another milestone of 250 million players.

The emergence of Fortnite and instant hit of the battle royale genre impacted the giants EA, Activision and Take-Two last year, with all the companies reporting muted numbers with the stock price declining for all the players.

EA jumped on to the battle royale bandwagon by launching Apex Legends in February 2019. As expected, it became a runaway hit touching 50 million players on March 4. In fact, it has been growing at a faster clip than Fortnite when it comes to player reach. The free-to-play game has been developed by EA’s subsidiary Respawn Entertainment. Investors will be expecting more updates from the management on how EA plans to monetize the game.

Based on the Fortnite’s success and profits generated for Epic, there would be more questions to management from analysts on the revenue forecast for next fiscal based on the Apex success. EA also announced that it plans to launch Star Wars Jedi: Fallen Order in November.